The Wizard of Oz: Meet the Cast! 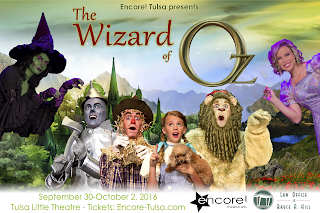 The Wizard of Oz runs September 30-October 2, 2016 at Tulsa Little Theatre
Tickets are now on sale!

Anabel is 12 years old and is so excited to perform in her fifth Encore! production. She recently played Centipede in James and the Giant Peach as part of Encore! Tulsa's Advanced Acting Intensive. She is a current Encore! student, and her other credits include The Lost Pages of Sleeping Beauty (Young Cinderella), The Wizard of Oz (Munchkin), and Charlie and the Chocolate Factory (Oompa Loompa).


This is Matthew's fifth production with Encore! Tulsa, having played Shere Khan in The Jungle Book, Harry Bailey (among others) in It's a Wonderful Life, Prince Charming in The Lost Pages of Sleeping Beauty, and Caesar in The Lost Pages of Oz. Encore! is thrilled to welcome Matthew back to the Tulsa Little Theatre stage.


Jared is excited to return to the Encore! stage, having performed in many productions in the Tulsa area. This is his 17th production with Encore!, and his favorite credits include Alice in Wonderland (March Hare), The Magician's Nephew (Uncle Andrew), A Christmas Story (Adult Ralph Parker), Winnie the Pooh (Rabbit), and Lost Pages of Snow White (Rumpelstiltskin).

Visit the About Us page to learn more about Joshua.

Welcome, Regan! Regan makes her Encore! debut as the Wicked Witch in The Wizard of Oz. Regan has played Lily St. Regis in Annie and is a working model, having appeared in runway shows for Tulsa Bridal Show and Tulsa Fashion Week, print publications for Tulsa People Magazine and Oklahoma Magazine, and other projects for Saks Fifth Avenue and Miss Jackson's.


Katie is a teacher at Bishop Kelley and a basketball coach who has recently discovered her love for acting. She made her Encore! stage debut as an Ozian Dancer in our last production of The Wizard of Oz, and she played Mother Wolf and Kaa in The Jungle Book earlier this year. Welcome back, Katie!

Guardian of the Gate: Autumn Villanueva